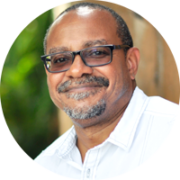 Inspired by the fearless ways in which Colin Robinson uses creative imagination to speak out against injustice, CAISO: Sex and Gender Justice launched the inaugural Colin Robinson Hard Head Award on July 29, 2020, at a joint Bocas Lit Fest/CAISO Sex & Gender Justice event, The Treachery in Every Poem, to celebrate the poetry of Colin Robinson. The award seeks to recognize and honour exceptional leadership in transforming how others see and imagine the world, particularly in the spheres of Transformational Activism, Artistic Boldness and Meaningful Solidarity. The purpose of the annual Award is to support individuals working towards equity and justice for all, whose work – like Colin’s – connects political advocacy, creativity, and coalition building. Named for Colin Robinson’s 2016 book of poems, You Have You Father Hard Head, the Award celebrates Caribbean understandings of the phrase, “Hard Head”,  signifying persistence, stubbornness, relentlessness, and focus.

CAISO’s beautiful, intrepid, and tireless founder, Colin Robinson, passed away on March 4th, 2021 in Washington D.C. after a protracted battle with cancer. Colin’s impact on how sexuality, gender, power, and justice are articulated, experienced, and legislated within the Caribbean was globally felt and recognised. Over the last 40 years, Colin courageously led the conversation around how black and brown people reclaim their queerness in spaces from which they are often shunned. This unfaltering courage led to his co-founding, leading and facilitating several of the most influential LGBTI+ organisations and movements within the Caribbean, namely the Coalition Advocating for the Inclusion of Sexual Orientation (CAISO) (founded in 2009) in Trinidad and Tobago – renamed CAISO: Sex and Gender Justice in 2016.

The work of CAISO continues as we build upon Colin’s legacy and decades of coalition and movement building for human rights and social justice. We awarded the 2020 inaugural award during an online ceremony on 21st November 2020, and Colin was with us to announce the winner and honourable mentions: https://caisott.org/the-2020-hard-head-award. The Hard Head Award is part of Colin’s legacy and we invite all those who want to build with us to donate and help us continue to support the work of activists in Trinidad and Tobago and beyond. We look forward to welcoming more nominations for 2021 and in the future with your help.

For more information about CAISO and our work, please visit the CAISO website: caisott.org or email us at caisott@gmail.com

NOTE: Please note that all donations are US tax deductible.