Deystvie (LGBT Action) is an organisation which aims to better the lives of LGBTIQ+ people in Bulgaria – the European Union’s poorest member state and one of the lowest ranking countries in regard to respecting human rights and achieving full equality.

Despite the extremely difficult context Deystvie is faced with, their mission is to achieve equal rights and social inclusion for the LGBTIQ+ community in Bulgaria via the means of legislative change and legal reform, as they believe this is the most effective and tangible way of cementing real change.

This month (May 2022) Deystvie turns 10 years old but it’s also the month in which funding for their long-standing legal programme ends.

Without this legal programme:

The Rustin Fund is partnering with Deystvie to ensure that the legal programme can continue to exist and support LGBTIQ+ people that are victims of discrimination and violence. Your campaign donations will support vital activities such as:

Supporting Bulgaria’s LGBTQ+ community means supporting one of the most marginalised LGBTQ+ communities in Europe. Please consider donating to support Deystvie’s fight for full legal equality. A win in Bulgaria is a win for everyone!

For more information on the all-important case in front of the Grand Chamber of the Court of Justice of the European Union (the case of Baby Sara), please visit the following link: https://en.deystvie.org/baby-sara-court-of-justice-eu

MOLI’s vision is more inclusive African societies reached through building African communities free from discrimination. As one of our strategic outcomes, we are contributing so partners in four Central and Francophone East African countries are duly equipped and supported to advance toward our vision through a set of various forms of support and resources we facilitate.

In terms of capacity building, MOLI plays a leading role to facilitate the strengthening and acquiring of skills at an individual and organizational level with ways of making an impact on the community as a whole.

On our way to supporting the most marginalized in the society, there are barriers limiting access to education: a state-sponsored homophobia that fuels societal homophobia and diminishes the sense of agency in queer people; and families without the income to assist children’s education because the economy has suffered years of conflict. The ability to offer opportunities to everyone regardless of their social background, identity, or sexual orientation will strengthen the community in Burundi.

The scholarship fund will be offering an opportunity to community members to further their studies:

The program seeks to reduce the incidence of violence based on SOGIE, mitigate socioeconomic barriers and exclusions based on sexual orientation and gender identity by facilitating LGBT youth to access educational opportunities so that they can enter the workforce!

Fulcrum, founded in 2009, promotes the rights of LGBTQ+ people in Ukraine. It is one of the most visible and active LGBTQ+ organizations in the country, focusing on community mobilization efforts, advocacy, and public awareness campaigns. Despite significant gaps in the protection of the LGBTQ+ people, Ukraine has one of the largest and most vibrant communities in Eastern Europe with a wider range of freedoms than most countries in the region.

The war that started when Russia invaded Ukraine on Feb. 24 has devastated the country and LGBTQ+ communities, who were already marginalized. Many have been forced to flee Kyiv and Kharkiv, two of the biggest cities with largest LGBTQ+ communities in Ukraine, to seek safety in the west of the country. The situation is even more severe for transgender individuals, who are unable to access the support they require, and some are denied border crossing and facing violence and gender discrimination. As a response, and since day one of the conflict, Fulcrum has been working to protect its community. They have set up two LGTBQ+ shelters in Lviv offering accommodation and support to approximately 100 individuals. They have rented non-residential spaces and adapted them to offer acceptable living conditions, including the purchase and installation of boilers, heaters, washing machines, showers, WiFi, beds, and other basic necessities.

The Rustin Fund is partnering with Fulcrum to raise funds for this urgent cause. Your campaign donations will support vital activities such as:

Providing temporary and safe housing at one of 2 shelters for LGBT+ people in Lviv, including internet access, food, clothes, and hygiene products

Medical and psychological support and supplies, including referrals and access treatment for HIV positive persons

Financial support, especially to those who lost jobs 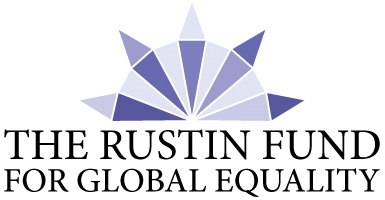 We here at the Rustin Fund operate as an all-volunteer organization so that all of your funding can do directly to LGBTI organizations all over the globe.  We do still have a few expenses, however, such as website hosting and credit card processing fees.  If you would like to donate to the Rustin Fund’s operations so that we can continue to direct all campaign contributions directly to organizations in low- and middle-income countries, please donate on this page. A donation made on this page may also go to one of our partners at the board’s discretion.